Randy King based in Northville, NY is a Writer and Blogger who provides fan-centric coverage of the Los Angeles Lakers on his blog and podcast, Lakers Lair on Basketball Society. 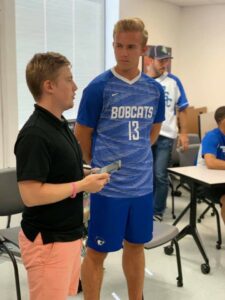 A lifelong fan of the Los Angeles Lakers, Randy King has always loved the game of basketball.  Now, he’s turning that passion into a profession by pursuing a career in the athletic industry as a writer, blogger and podcaster.  King brings his love of the sport — and his favorite team — to the tale in fan-centric content on the Basketball Society.  As the co-host of Lakers Lair, he enjoys sharing unique stories and insight led by interviews, guest appearances and discourse that appeals to the dedicated LA Lakers fan.

In 2018, Randy King graduated from Buffalo State College with a Bachelor’s degree in Communication Studies.  During his enrollment, King earned his place on the Dean’s list honor for 6 out of 8 semesters.  He was also inducted into the Communications Honor Society (Lambda Pi Eta), among his peers of fellow aspiring writers and journalists.

Randy King was actively involved in the publication of Buffalo State College’s student-run newspaper, The Record.  In this role, King wrote player profiles, game highlights and other athletic discussions, which were published on Buffalo State’s athletics webpage.  He also utilized a code specific system during games which recorded statistics into a computer.

Before taking the helm of the Lakers Lair on Basketball Society, Randy King established the earliest stages of his career by working with local newspapers and radio stations.  King has previously contributed to The Leader-Herald and The Daily Local as a Freelance Sports Reporter.  He also worked as a Radio Producer at a local ESPN radio station, providing post-game coverage including highlights and fan-led discussions.