Paul Cazarez is a Principal World Builder who specializes in environment modeling. 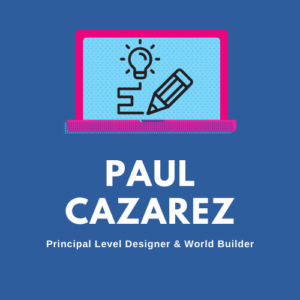 Paul Cazarez currently works as a Principal World Builder.  For more than two decades, he has grown in tandem with the ever-evolving area of digital world building.  Having the opportunity to grow alongside his area of expertise, in real time, has been quite the privilege.  But the growth isn’t over yet!  There is still so much ‘newness’ to be enjoyed, every single day.  And that’s exactly what keeps Cazarez so passionate about the work that he does and the things that he has the opportunity to create.

Paul Cazarez graduated from the High Tech Institute of Arizona in 1996.  This pursuit set the foundation for his career.  With his sights set on a career in the realm of computer science, Cazarez continued on to the Art Institute of Phoenix.  After graduating from AIP in 2000, his ensuing education would be very much performance and experience based.  Learning more and more with each role, Cazarez eagerly keeps pace with the world building industry by teaching himself all the latest techniques and best practices in the unique field.

This seasoned world builder is experienced in utilizing 3D graphics software and programs such as ESO Edit, World Creator, Axe Editor, 3D Studio Max, Maya, AutoCad R13 – 2000 and Unreal Engine.  As far as 2D graphics is concerned, he excels in the use and application of Adobe Photoshop and Adobe Illustrator.  He is also a professional whiz at Microsoft Office Applications, including the professional suite versions of Word, Excel and Outlook.

Paul Cazarez is well versed in building walls and modeling environments for programs played on a wide variety of platforms and consoles.  He is most experienced in building products for PC, Microsoft Xbox and Sony Playstation.  However, Cazarez is not one to shy away from a challenge.  He looks forward to taking on projects within other platforms in the future, especially as specialized categories and genres expand.  In particular, Cazarez is eager to see where Virtual Reality (VR) and world building technologies will combine to create the experiences of the future.